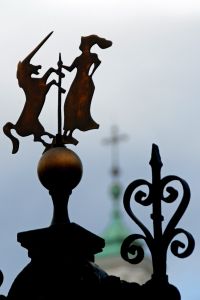 I sometimes wonder what religion must sound like to non-believers.  This whole “I live for Jesus” business a big fat excuse so that bonnet-clad women won’t feel so bad about their lot in life, selling rosemary soap and black currant jelly, sitting on rickety wooden seats next to their overbearing husbands.  To those who haven’t been raised in church, or even worse, have been burned by the allegedly faithful, religion a hard pill to swallow. I get it.  It rings false.  It’s just something to make us all feel good in the dark, cold nights. “They are church folk,” we want people to say, like it makes us honest or All-American. It’s what we cling to when we have cancer or when children die in car accidents.  It makes the unfair fair again. It washes the ugly clean.

To many, it’s not real.  Talking of Jesus is as crazy as circus clowns or unicorns.  Which made me think of the following imaginary conversation one might have at a dinner with a girlfriend, right after the talk of Oprah’s future and the importance of shellac pedicures.

“What the heck is that?” The check came and you had pulled out your wallet, which was naturally covered in pink, sparkling unicorns.  “Don’t tell me you’re into that sort of thing,” your friend said.  Her mouth was hanging open like a carp. “Is that a rainbow antler? Good gosh.”

“Back off,” you said.  “It’s complicated.” You stuff the wallet back into your purse, embarrassed.  “I went to a retreat.  I was touched by magical power. Whatever.”

“I can’t believe you fell for that crap,” she said.  Perhaps your friend thinks she’s being helpful. Enlightening you on your errant ways.

“It’s just the way I want to live my life. Geez.  It’s not the end of the world.  Unicorns believe in peace and love and the power of healing.  What’s so wrong with that?”

“Because you are a smart, strong woman,” your friend said, “and although you can believe in whatever you want, I think you’ve gone a little bonkers.”  She waved at the waitress for a to-go box and muttered something about anti-unicorn therapy.   Acupuncture, perhaps.  You reached for your pocket and felt the unicorn sayings, tucked safely inside, out of reach.

“There’s no evidence they ever existed on this planet,” your friend finally says, as if reason might prevail.

“I just have a feeling.  Don’t knock it. We all have our thing.”

I was wondering, as I was shampooing my hair and imagining this conversation, if that’s how it sounds.  Like Jesus and unicorns are in the same category, full of magic and miracles, made up to make life more beautiful.

It might be easy to convince half-starving folks in third-world countries that Jesus Christ was real. The weak and helpless have nothing else to cling to.  They need to know that this world isn’t all there is.   But well-educated Americans who have mortgages and favorite bands and trust funds?  Well, not so much.   I guess they think Christians can’t stomach the thought that dying just means dying, our flesh rotting in the ground for all eternity.  We just can’t handle this life being all there is because we’ve messed it all up so royally, so we made up a place like heaven and God and the angels and prophets to give ourselves something to live for.  To give us hope.  The Bible makes us feel good, like sparkling rainbow unicorns, full of love and happiness and forgiveness and the like.

To these people I just don’t know what to say.  Being a witness and sharing my faith is a weakness of mine, and I admit it.  Before I started blogging, putting my thoughts on paper for the world to see, many folks didn’t even know I was a Christian at all.  I felt it had no place in the world of law, or when I was giving speeches, or in any of my professional circles.  I knew a doctor for five years before she said once to a colleague “This is Amanda.  She’s great.  Very religious, but you’d never know it.”  Like that was a badge of honor.  Like I kept my crazy wallet hidden away so no one would ever see.

In the small, Texas town I grew up, it was so normal to go to church, or say you believe in God, or have a wrist band bearing “what would Jesus do?”  But as I grew up and moved away, I’ve seen the cynicism grow.  I have seen grudges against the faithful turn slowly into valleys of hate, like one side is right and just and intellectual and the other is mind-blowingly stupid and sheep-like in their blind acceptance of the unseen.

I’m not perfect.  I love my children and my husband with a fierce, protective love, and I can’t imagine walking away from them for anything, even if I heard voices telling me to in the name of God.  If I were put in the position of Abraham or Job I’d probably commit myself to a mental institution.  And for heaven’s sake don’t make me sell my home and live in a trailer or give my Whole Foods slush fund away to the poor. Sometimes I just beat my hands against my forehead at so many missed opportunities. For thinking my faith is just something to be shared on Sundays and locked up the rest of the week.  I can be just as disingenuous as the next guy.  I think at times I might even give religion a bad name.  I hate that.

But despite all this, I still believe.  I believe that God has directed my life since the moment I was born.  With every sinewy muscle in my body I throw myself into prayer, my heart exposed and raw, my failures unmasked.  I don’t do this because I feel I need a crutch, or because I need something to cling to, or because the thought of rotting in the dirt seems incredulous.  I do this because I have felt the power of God ripple through my soul.  I heard the words of a nurse in the hospital, after four long weeks of post-partum infection, when I felt so lost and broken, that “you are God’s child.  He will never leave you.”  She came at night.  My husband was asleep and never saw her. It was as if I knew, at that moment, that my life was not my own.

I have no magic words that I use to convince people I’m right.  That Jesus lived on this very earth that we walk upon.  That the era of Jesus wasn’t some made-up time period, squeezed into history books with quotation marks.

I just believe.  I don’t know how to make it sound any more legitimate than that.  I suppose you can reason that one single man in the history of the world has never made more of an impact.  That people of great intellect and credibility and heart that profess to believe in Jesus can’t all be stupid.  But in the end it’s not about these things. It’s not about what others think or feel, or how much you’ve done to earn your wings.   It’s not at all about your ability to evangelize. In the end it’s just you and God.

I suppose it’s not possible to change everyone’s minds.  To some, I’ll forever be talking nonsense.  They shake their head and chuckle under their breath.  I hope these dear friends are not forever lost.  That God cracks the armor of their hardened hearts.  I pray that the love and grace and mercy of God pierces their anger, and all that disbelief comes flowing right out.

Life is not a fairy tale.  It’s gruesome and unfair and messy.  God is not some magical beast that dances around with sparkles, and Jesus is not some knight in shining armor.  I certainly don’t profess to be a Christian so I can win points with neighbors or look good to the book club girls.

God is simply God.  Jesus is simply life.  And that’s about as magical as it gets.

This entry was posted in My life, Religion and tagged crazy, faith, religion, un-believers, unicorns. Bookmark the permalink.